These research reviews inform practitioners and researchers about key debates, evidence and emerging issues in international media development. They provide concise analyses of current research, both academic and non-academic, and discuss its practical relevance for international media assistance. 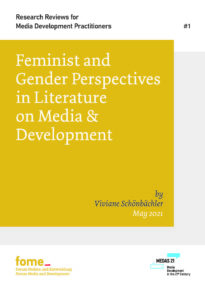 #1: Feminist and Gender Perspectives in Literature on Media & Development 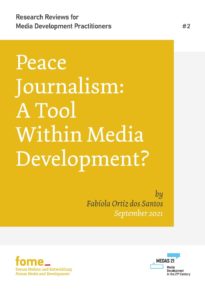 The role that the news media play in wartime has been an important topic in journalism scholarship. Peace journalism has become a popular concept in the study of the media’s role in conflicts in the early 21st century. This literature review seeks to determine whether peace journalism can be considered a tool for the field of media development, formulating some concrete recommendations for practitioners. Defining the core tenets of peace journalism, it discusses the ways in which journalists have been perceived as contributors to peace and the extents to which this notion has been both criticised and used in media development. In conclusion, the review points to future research to help deepen the understanding of this approach and the potential for its implementation. 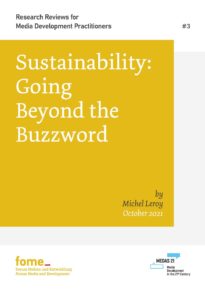 #3: Sustainability: Going Beyond the Buzzword

This literature review aims to trace the social construct of sustainability in the context of media development and define what is to be sustained, at the level of the intervention (the process of change) or its outcome (the impact on the medium itself ). It is intended for all those who are concerned, closely or remotely, with ‘media action’ – and this expression is used here to mean any intervention (inside or outside a given media system) that promotes either communication for social change (the use of media for development purposes) or media development (the targeted development of independent outlets). The literature review focuses on the evolution of the concept of sustainability and the way it has been endorsed by the media, media action implementers and donors over time, as funds dedicated to media assistance have increased and the digital revolution has questioned most of the foundations of the media industry, with regard to production, distribution and information usage. 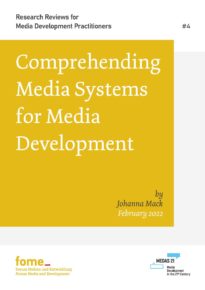 Media development assistance and media systems research are intricately connected: by describing, assessing, and attempting to change them, media development actors produce knowledge about media systems and directly impact them. This research review explores the intersections of academic media systems research and practices of describing and assessing media landscapes in the media development sector and suggests how both could learn from each other. In what follows, the most important publications on media systems since the Cold War era will be reviewed, tracing the ongoing process of refining concepts and definitions. Alongside a geographical broadening of the research scope, models as well as methodological approaches have been questioned and reinvented. The review places a special focus on the peculiarities of researching media systems in sub-Saharan Africa.